I’ve been undecided on climate change for a long time, I and felt a bit guilty about that.  I’m generally in favor of nuance, but this issue seemed to me to be too important to pussyfoot around.  But I’ve been casually researching this and assessing different views, and I think I’ve come to a nuanced stance that I’m confident enough to express publicly.

Many views are overly politicized, and this is only increasing, but climate change has been overly politicized for decades and is probably politicized more than any other scientific issue.  If you’re left-wing, you’re supposed to think it is real and is mostly man-made.  If you are right-wing, you are supposed to think either that it is not happening or that it is natural and largely out of the hands of humans.  But, like most things, it is a great deal more complicated than this.

First of all, the most violent fluctuations in Earth’s climate have historically been caused by natural disasters: mostly asteroids and comets, but also volcanoes.  Man-made factors like the greenhouse effect are only one part of a very complex system.

As I mentioned in Evidence for the Younger Dryas Impact, there is compelling evidence that the Younger Dryas was caused by an asteroid impact, but that only explains the rapid cooling.  The rapid warming that ended the Younger Dryas about a thousand years later is still quite mysterious.  And that heat wave, around 11,700 years ago, makes the current warming trend look like a puny summer breeze.

Estimates for past temperatures can be pretty accurately calculated by analyzing ice cores in places like Greenland and Antarctica.  So lets take a close look at the history of Earth’s climate.

The top graph on the picture below shows Earth’s temperature over the last 5 million years.  The main things you can take away from it is that the climate has always been very erratic, that the overall trend over that time period has been gradual cooling, and that there is absolutely nothing unprecedented about the current situation.  The bottom graph shows the temperature over the last 800 thousand years.  The spike you see at the end is the aforementioned heat wave at the end of the Younger Dryas, not the current crisis.  As extreme as that was, even it is not unprecedented.  It is outdone by the Eemian spike of around 120 thousand years ago.  On two occasions in this time period, the Eemian and the Holseinian,  temperatures were higher than they currently are.

That being said, current temperatures are extremely high, but it is important to note that the vast majority of the warming trend that got us to this point happened more than 11 thousand years ago, long before humans started releasing CO2 into the atmosphere in large quantities.

Now, the next graph shows the temperature over the last 17 thousand years.  As you can see, it begins around the end of the last ice age, then dramatically increased for an unknown reason less the 15 thousand years ago, then came the Younger dryas, followed by another equally mysterious warming period.  The last 10 thousand years or so have been pretty consistent, though hotter than average.

If you have seen a graph from climate alarmists, it probably looked something like this one. 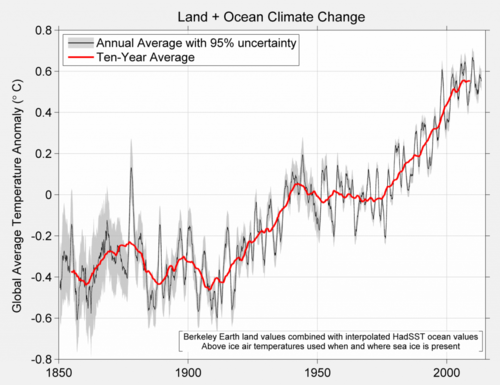 Though mostly accurate, it doesn’t really give the full picture, does it?  Obviously the graph excludes the ice core data.  This is like watching the last scene of a movie and thinking you understand the plot.  Furthermore, the methods for measuring average global temperature are somewhat controversial and disorganized.  If you don’t know what I mean by that, I will direct you to this informative video from James Corbett.

Another piece of data that climate alarmists tend to ignore is that the temperature also seems to have decreased from 1998 to 2006.  It dropped off after the first El Nino in 98 and then leveled off after eight years.  Since then, it has increased at a more gradual rate than the pre-El Nino trend.

Scientists seem to have formed a very dogmatic cult over this issue, as they’re known to do. (see Skepticism and the Gobekli Tepe Debacle)  One of the most disturbing quotes I’ve ever read came from a leaked email from award-winning climate scientist Phil Jones: “We have 25 or so years invested in the work.  Why should I make the data public to you, when your aim is just to find something wrong with it.” And this was not just talk.  He has fought to conceal his data and sources from the public.  Climate science is the only scientific field I know of where you can get away with such unscientific behavior. This man is an insult to the scientific method.  Any real scientist who has confidence in their work would be happy to hand their data over to a skeptic.

Climate alarmists have been giving us doomsday warnings for decades now.  The Maldives are supposed to be underwater by now.  There are supposed to be catastrophic droughts and wars over water.  But the world hasn’t really changed that much since the day I was born, so excuse me if I’m not trembling with fear over the UNs latest ‘three years left until the point of no return’ warning.

If you’ve read this far, you’re probably thinking: “Wait a minute.  I thought this was supposed to be a nuanced argument.  This asshole is just another climate change denier.” The fact is, dogmatic climate change deniers need to get over themselves and acknowledge their side’s blatant conflicts of interest.

It makes me feel dirty that I am somewhat in agreement with the American Republican party, because the republicans are right about absolutely nothing.  I was thinking of going to take a shower to wash the filth off when I remembered Republicans have no core philosophy at all.  They base all their decisions off of which corporations bribe them, and they are all bribed by the fossil fuel industry.

Interestingly, the fossil fuel industry has also funded some pro-climate change research/ propaganda, but with a twist, pointing to their rivals, the coal industry, as the root of the problem.

I think there is merit to the greenhouse effect theory.  CO2 emissions do seem to correlate to with the temperature increase.  So when people make the argument that ‘97% of scientists think climate change is real and that humans are making is worse,’ I don’t disagree.  The question is to what extent are they making it worse.

I see a lot being blamed on vehicular CO2 emissions.  Most of the virtue signalling I see is over cars.  People like to pretend they are making a big difference by driving a Prius instead of a Truck.  But is that really such a big deal?  Lets take a look at the sources of greenhouse gasses.

Transportation amounts to only 13%, slightly less than agriculture (primarily animal agriculture).  So if you are bragging about how virtuous you are for riding a bike to work, yet you’re not a vegetarian, you can shut up now.  Deforestation accounts for 17.5%, so if you are pissed off about Trump pulling out of the meaningless Paris Climate Agreement, but have remained silent  on the infinitely more harmful decision by Brazilian president elect Bolsonaro’s plans to cut down much of the Amazon rain forest, you need to reexamine your priorities.

Both sides of the argument have, from time to time, been guilty of willfully confusing the words ‘climate’ and ‘weather.’ Deniers think every time it snows, that is proof that global warming is a Chinese hoax or whatever.  When Oklahoma Senator Jim Inhofe brought a snow ball into the senate and thought it was a ‘gotcha,’ alarmists rightfully called him a moron, yet every time there is a hurricane, those same alarmists will pretend that it proves their theory.

For the record, I am 100% in favor of transitioning off of fossil fuels and onto renewable energy, though for different reasons than most people who hold that position.  I think it is extremely dangerous for our main source of energy to be a finite resource that only exists in some countries.  It causes wars like the ones in Iraq and Syria, and it allows psychopaths like those in the House of Saud to amass unspeakable wealth and global influence.  It will also only get more and more expensive as the supply dwindles.

In conclusion, man-made climate change is largely over-hyped hysteria, but climate change in general is very real and, frankly, terrifying. We are living on a planet whose climate can violently change with little warning.  Scientist should be doing everything they can to understand and minimize these threats.  Earth’s climate is a complex system with many factors of which the Greenhouse Effect is only one.  Love your family and your neighbors.  Our existence on this pale-blue dot is precious and fragile.