Southeast Asia is one of the most diverse regions on the planet.  The differences in culture and language can be startling when you cross over a border, and even the differences within a country can be significant.  This will be a brief overview of the various ethnic groups of Indochina.  Indochina is usually defined as Cambodia, Laos, Thailand, Vietnam, and sometimes Myanmar and peninsular Malaysia.  It is so called because it was viewed by early travelers as some kind of middle ground between India and China.  This is somewhat accurate though, of course, not so simple.  There is a mesmerizing array of different people groups as you can clearly see in the picture below.

I like to first look at linguistics when analyzing ethnic groups.   There are 4 main language groups in the region.  They are Austroasiatic, Tai-Kadai, Tibeto-Burman, and Austronesian.  It is widely assumed that the Austroasiatic peoples were the original inhabitants of Indochina with their presence almost certainly going back well into prehistory.  Their current distribution stretches all the way to India and includes dozens of languages, the most notable of which are Vietnamese, Khmer (the national language of Cambodia) and Mon (spoken by about 8 million people mostly in southern Myanmar).

Relative newcomers to the region are the Tai-Kadai.  It is believed they originated in Guizhou in southern China or Hainan Island and began their southward march about a thousand years ago.  Their most notable people groups are the Thai, Lao, and the Shan people of eastern Myanmar.

The largest language group in Myanmar are the the Burmese, which comes from a branch of the Sino-Tibetan language family known as Tibeto-Burman.  Tibeto-Buman also includes the Karen groups of eastern Myanmar.  They have also occupied these lands since prehistoric times.

Lastly are the Austronesians.  They include the Malays and Chams but also Filipinos, Melanesian, and Polynesians.  The Chams once had there own Kingdom in Current day central Vietnam.  Now they are a minority group in Vietnam and Cambodia, numbering about 400 thousand.  They mostly practice Sunni Islam, but some still adhere to Hinduism. 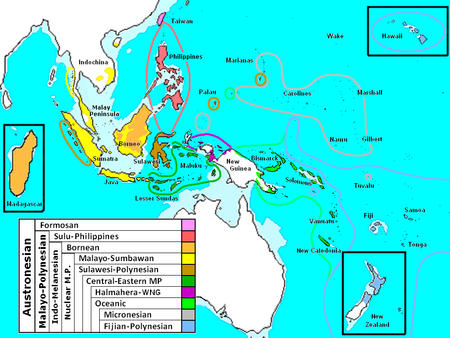 The Austroasiatics probably haven’t been a unified culture for at least 4,000 years.  Their culture is believed to have originated along the Mekong river.  Early groups migrated to far off places like Malaysia, China and India.  The two main groups in Indochina split.  The Vietnamese occupied the Red River Valley in modern-day northern Vietnam and were eventually annexed by China.  The Chinese ruled Vietnam from about 111 BC. to 938 AD.  It’s language was largely creolized and now shares many common features with Cantonese.  The Khmer maintained independence and became a successful kingdom.  Beginning with the kingdom of Funan from around 0-550 AD. to Chenla (550-802) to the Khmer Empire (802-1431).  The Khmers enjoyed prosperous trade relations with China, the Malays, Java, and especially India.  Much of Khmer culture comes from India.  At it’s height, the Khmer Empire controlled all of Cambodia, Thailand, the Mekong delta of Vietnam, and some of Laos, Malaysia, and Myanmar.   Meanwhile, the Chams arrived around the 2nd century and set up camp in central Vienam and began the Kingdom of Champa. 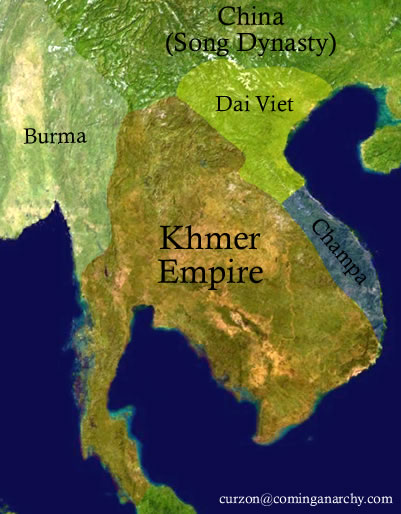 Upon gaining independence, the Vietnamese commenced their march southward, conquering Champa in the 15th century and took the Mekong Delta from the Khmer around 1698.  Now the Vietnamese and Khmer are neighbors again, but after 4,000 years of linguistic evolution, their languages are nowhere near mutually intelligible.

The Thai also began migrating South and sacked the khmer capital, Angkor, in 1431.  The Kingdom of Siam (now Thailand) has been a major force in the region aver since.

The Thai have adopted much of Khmer culture, and the two groups have extensively shared words and interbred.  Today the two cultures and ethnicities are much more similar to each other than either is with Vietnam.  They both largely practice the same form of Theravada Buddhism.  If a Thai person walks down the street in Cambodia, he or she could be mistaken for a local, whereas a Vietnamese person would stick out like a sore thumb.

Most Lao (also known as Isan) live in Thailand, and they only occupy about 15% of their country of Laos.  They are the dark blue race in the picture at the top of the page.

Thai is divided into Central (also known as standard Thai), Northern, Southern, and Lao/Isan.  Linguists debate on whether or not they are dialects of separate languages.  They have a large degree of mutual ineligibility.  Speakers of the latter three are almost always also fluent in standard Thai, but native speakers of the former would have a hard time understanding the latter three.

Khmer communities also spill over the border into Thailand.  So no matter where you go along the border, you are likely to find a Khmer-majority population on both sides.

Mountainous areas in Indochina are largely occupied by Ethnic minority groups and tribes.  This is mostly true along borders where they act like a buffer zone between the majority groups.  You can see this along the Cambodia-Vietnam, Laos-Vietnam, and Thailand-Myanmar borders.  Most minority groups in Cambodia, Laos and Vietnam (with the notable exception of the Chams and Hmongs) are Austroasiatic.

The Lao people only occupy a the low-lying areas along the Mekong and other rivers in Laos.  They make up about 68% of the nation’s population of 6.5 million.  There are about 15 million Lao people in Thailand, comprising about 24.9% of that country.  The Thai and Lao languages have about 75% words in common.

One of the most interesting things about Laos is that its various ethnic groups inhabit different elevations.  This makes for a non-even dispersal as you can see in the picture at the top of the page.  The Tai-kadai Lao people live in the river valleys.  The middle elevations are home to Austroasiatic groups like the Katuic and Khmuic.  In the most mountainous areas and on plateau tops you can find other groups like the Hmong who are related to the Miao people of southern China.  The groups of these three elevations have unrelated languages and cultures.

Vietnamese make up about 85% of that county’s population of 94 million.  But, like the Lao, the amount of land they occupy is small.  They have large population centers in the North and South but occupy only a small sliver of coastal land in between, with minority groups occupying the interior.

Cambodia is the most homogeneous country in the region, with the Khmer comprising at least 90% of its 15 million people and occupying a strong majority of land.  There are around 1-2 million Khmer people living in each Vietnam and Thailand.  The dialects of these people have diverged, and it is difficult for speakers of standard Khmer to understand them.

The Burmar people comprise about 68% of Myanmar’s population.  They speak Burmese, a Burmo-Tibetan language.  Like the Khmer, Thai, and Lao, they mostly practice Theravada Buddhism.  But there are several other large ethnic groups numbering in the millions.  These include the Tai-Kadai Shan, the Austroasiatic Mon, and other Burmo-Tibetan minority groups like the Rokhine and Jingpo.   Karen State is comprised mostly of many unrelated tribal groups placed under the umbrella term ‘Karen.’  Many of these people also live across the border in Thailand.  One of the Karen groups are the famous neck-ring women you’ve probably seen pictures of.  Collectively the various Karen groups number more than 5 million. 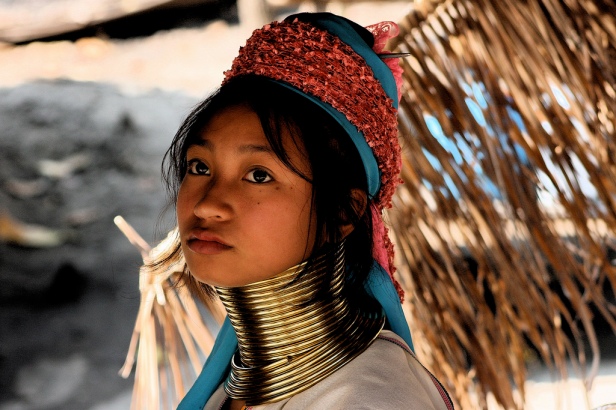 Myanmar’s Burmese dominated government is hostile towards some of its minority groups.  In western Myanmar, there is a group called the Rohingya.  The Rohingya mostly adhere to Sunni Islam.  They speak an Indo-Aryan language and appear Bengali in phenotype.  They claimed to have lived in Myanmar for centuries, but the government considers them illegal immigrants.  There are believed to be more than a million of them in Myanmar.  They are routinely rounded up and deported (rendering them stateless) and sometimes, if they resist, are killed.

The aforementioned Shan people have their own state which they consider an independent country.  Shan State makes up about a quarter of Myanmar’s land area.   They also have there own military and are officially at war with the Burmese government.  The conflict has largely been drawn to a ceasefire.  A noteworthy aspect of this dispute is that most of the methamphetamine in Asia (and increasingly on other continents) and much of the heroin is manufactured in Shan State.  The drug trade is the bases of Shan State’s economy and a huge boost to the Burmese economy.  I think it is more than reasonable to speculate that Shan State is allowed to maintain its simi- independence because of kickbacks paid to the Burmese military.

The majority group in Malaysia are the Malays at about 68%.  They are Austronesian, so related to Chams, Filipinos, most of the various people groups of the Indonesian islands, and, distantly, Polynesians like Hawaiians.  They migrated to the area several thousand years ago and have largely adopted Sunni Islam.  The indigenous people of Peninsular Malaysia are Astroasiatics.  The Austroasiatic group in Malaysia are called Aslians.  They are mostly relegated to interior mountainous areas and number only about 50 thousand.

During the time of colonization, the English allowed many Chinese and Indians to immigrate to Malaysia.  Chinese now make up about 23% of the population, and Indians (mostly Tamil and other Dravidians) are about 7%.  Despite their large numbers, these minority groups have almost no representation in the Malay government and are discriminated against by the legal system.

I should point out that the Chinese have been a common presence throughout the region for all of recorded history.  Most people living in Indochina today have at least some Han Chinese ancestry.

All these majority groups are very nationalistic and passions and hatreds run deep.

I can speak with the greatest experience about the Khmer.  The arch enemy of the Khmer are the Vietnamese.  It is surprising to most foreigners who first come to Cambodia how deeply rooted the hatred and mistrust of the Vietnamese is.  The racism is expressed openly by politicians and the media.  Though it has been more than three hundred years, to hear Khmer people talk about the annexation of the Mekong Delta, you would think it happened yesterday.  There is a deep suspicion among the more conspiracy minded that most of the Cambodian government are puppets of the Vietnamese and that they are involved in a long-term plot to sell the entire country to Vietnam.

The Khmer have a love-hate view of the Thai.  The Thai are accused of stealing Khmer culture.  Thai religion, system of monarchy, architecture, music, dance, drama, kick boxing, traditional fashion, mythology, tattoos and more are all claimed by the Khmer. At the same time, most Khmer people admire Thailand as a model for what a successful Theravada kingdom can be like.

To the extent that Khmer people think about Laos, they are viewed like brothers who have been mutually caught between their two more powerful neighbors.

The Vietnamese tend to look down on the Khmer and Lao as lazy, unproductive and simple-minded.  They view Thailand as a rival, because they have very similar economies, and with a hint of jealousy, because Thailand was the only Indochinese country never colonized by a European power.

One thought on “Ethnicities of Indochina”